Most project owners or clients simply have ideas about their product, its functionality, and how much they are willing to spend to bring it to live. But when it comes to the selection of which tech stack for mobile app development is best for a project, they aren’t knowledgable enough. This can lead to them making very costly mistakes. It’s absolutely right to listen to the mobile app development agency handling your project but having a basic knowledge of these things is very helpful.

First of all, what do we mean by tech stack? Technology stack which is also referred to as solution stack is a list of all the technology services used to build and run one single application. Also, it combines programming languages, frameworks, libraries, UI/UX solutions, and tools a developer would need to interface with the application. In no particular order, here are some of the tech stack for mobile app development our Engineers use in delivering valuable digital projects to our clients.

Numerous developers are embracing this tech stack which was developed by Google. Flutter is a mobile app SDK for building modern apps for iOS and Android devices. It is an open-source tool and uses Dart programming language. If you need a tech stack in the cross-platform mobile development category, then you should check out this tool. We love Flutter because it aids speedy app development. It also gives you an avenue to experiment with your options. Another advantage is that you get to fix bugs in no time. When it comes to creating an awesome user interface, this tool also works perfectly. It has in-built widgets, motion APIs, and also turns UI codes into pixels.

In terms of integration, you can easily integrate Flutter with tools like Android SDK, Agora, Firebase, Outbrain, Appwrite, and a host of others. With this tool, you can reuse Java and Objective C codes as well as access other native features on iOS and Android. The downside of Flutter is that, at the moment, you can only use it for building mobile apps as it doesn’t support web browsers. Moreso, since it is a recent tech stack it doesn’t have all the useful libraries developers are likely to need.

With React Native, developers can use JavaScript to build native cross-platform mobile apps. It allows for native functionality, custom UI, native code integration, app branding and more. With the hot reload feature you can see the recent modifications you are making. Not to mention that the platform has numerous free testing libraries that allow developers to create error-free codes. If your developer uses React Native tech stack for mobile app development the right way, users can’t really tell the difference between a React Native and a native iOS and Android app. Although it will take developers more time to develop your app using React Native tech stack, it is still very cost-effective. Besides all of these, apps built with react are very scalable and bugs can be fixed quickly. You can integrate React Native with Algolia, Buddy, Vue Native, iOS, Expo, and more.

Some of its users call it a high-quality framework. Components of Ionic are written in HTML, CSS, and Javascript. When you want to build super-fast apps on all devices, then you should go with the Ionic stack. You can use it with other frontend frameworks like Angular, React, Vue, or vanilla JavaScript. It produces top-quality user interface for today’s users.

According to the developers of this tech stack, there’s no limit to what you can build using Ionic. You also get access to a rich library of over 120 native device plugins. With this cross-platform framework, apart from developing mobile apps, you can also use it in building web apps. We don’t really enjoy using this tech stack for mobile app development because of the absence of hot reloading features. Additionally, writing various lines of codes in HTML, CSS, and Javascript makes apps developed with this platform quite heavy.

One of the most popular mobile apps using Kotlin is Netflix. When a developer writes a code in Kotlin, it easily works the same way with Java. This means you can easily switch an Android app developed using Java to Kotlin and add or update its features. If you insist on using Kotlin as your preferred programming language you must note that there aren’t so many developers out there who are proficient in this stack. Moreover, there is still limited resources available for those interested in learning Kotlin. 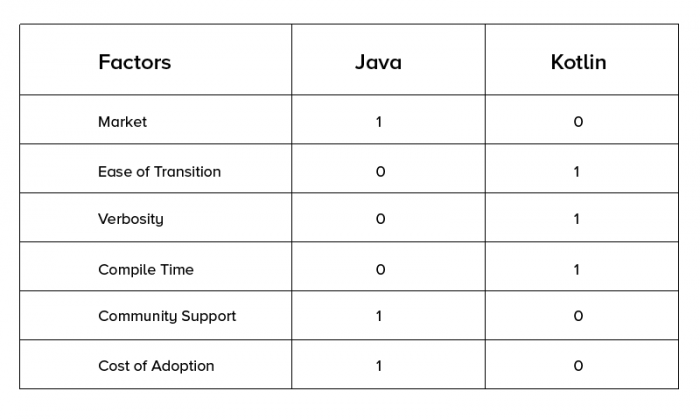 The tech stack for mobile app development you decide to use goes a long way in affecting your app’s functionality, capability, scalability and the ability to implement ideas that weren’t in the original plan.

Hiring a software development company to work on your project will help you save cost in the long run. This is so because they normally have developers who possess a combination of the best and latest tech stack you’ll need, unlike a freelancer. With a freelancer, your options are limited. Plus, there’s no collaboration, meaning, he’ll either use your project to learn the required tech stack or manipulate his way around the whole thing. No user wants to use an app developed by an amateur which is likely to frustrate them. If you do not have a budget to get a skilled team on board, you should consider sourcing for investors else you might not really go far with your mobile app development.

Do you have an app idea you’ll love to see come alive? Speak with the Big Field Digital Team. Our team of expert mobile app developers in Nigeria are ready to work with you. Check out how we’ve been helping clients around the world deliver top-notch mobile app development projects.