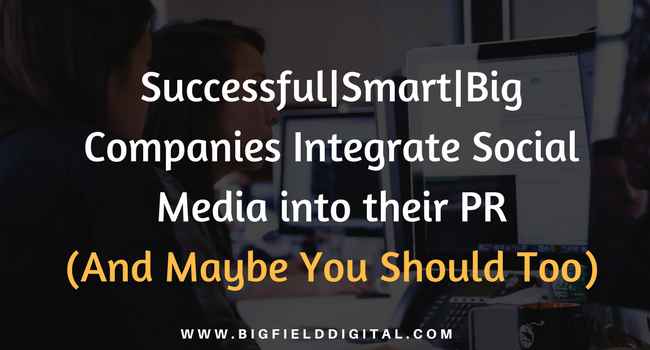 The business world has always known the essence and importance of PR. It’s second to none! Traditionally, PR fills that gap between an organisation and the public. Public relations professionals were responsible for the engagement a company had with its audience or customers.

They did this whether to announce a new major change in the company; or to react to bad press. This is done in the bid to minimize reputation damage; or to announce new offerings, products, whatsoever the case may be.

Positively, they also come forward to receive appraisals being given by the public to the company.

How Public Relations has evolved

It’s obvious why such tasks basically determine the success of any organisation. Once customers have a bad opinion of the company, it subsequently leads to a nosedive in the company sales.

This also happens when customers are not updated with an organization’s latest product. However, that approach has changed since the advent of social media.

Social media brought down the huge wall between the public and a company or brand. It has shortened the time a company has to react to relevant stories. It has also facilitated a link-up between the ranks of marketing and public relations.

As a matter of fact, when social media is done right, an entire product launch could be executed on social-media. Sometimes, drastic product price changes can also be spread through the social media. This has been seen executed in the past years by some big companies. Native media is alternatively used in some geographical locations due to low literacy levels that’s accompanied by the low level of mobile and internet literacy.

Social media helps public relations professionals meet their objectives; it could also be the hindering factor in the reputation management process, depending on the situation.

PR professionals could not avoid the impact of social media on their industry. Hence, they have taken the bulls by the horn and ridden upon its back themselves.

Here are the common ways public relations teams use social media for their companies:

There is a need to stress this point by making it the first point, mostly because a lot of crisis and bad media can be avoided via fast and calculated social media responses when such situations arise. It’s not news anymore that; bad media means bad reputation, and bad reputation results in either slightly low sales or extremely low sales. To this cause, public relations professionals use social media to dowse all online crises that may lead to a negative brand reputation.

A very great advantage that social media adds is that it allows companies or brands, and PR teams alike, to respond in “real-time” to situations and/or customer conversations. Since, customers are increasingly having greater and easier opportunities to interact directly with brands online, PR teams have begun taking advantage of the “instant” nature of social media to tackle crises and maintain a positive online reputation for their brands.

2. Develop Relationships with the Media and Influencers

Public relations professionals understand the role of media relationships in the industry. By interacting with journalists, media outlets, and influencers on social media, companies extend the professional relationship beyond the press release pitch. This increases the chances of gaining media coverage with the right outlets.

Very often, we notice online media outlets re-distributing company statements with the use of retweets or shares on twitter or Facebook respectively without even being offered anything to do so. Likewise, brands enlist the social presence, authority and skill set of influencers to push a new product into the market, and sometimes having to pay them. That’s because they have realized the power these influencers wield on social media, and definitely know they will achieve optimum results in doing this.

3. Know What Customers are Thinking

This falls under the social listening category of social media. This has given professionals the power to understand the public’s opinion before it results into massive gross loss in their books. They could proactively identify the threats; realize opinions and issues that people might be having with their brand or products.

Brands can easily identify the public’s opinion of a new product launch or existing product. Customers are constantly throwing out their views and opinions of different products they use, and smart brands have taken this opportunity to listen to what the customers have to say, and subsequently go ahead to change or do something differently.

Even better, some brands have taken advantage of the openness of social media by getting to know what their audience thinks about their products even before going to launch. This is done by making the products’ features known to their audience, getting feedback from them, and ultimately using these feedback to tweak certain things in their products, even before they go to the launch stage.

A major platform for this is Twitter. Anything can easily travel fast on Twitter, especially for big brands. It wouldn’t be so surprising to see public relations professionals using the platform to make their major announcements. Even the minor announcements are communicated through these platforms, since they’ve recorded a wide reach of their audience on these platforms.

From interesting snippets and links on Twitter to full stories on Facebook, as well other social media channels, brands reach a much wider audience via social media than the local platforms. Too many times, I’ve seen company updates, new service options, products, and price changes on social media long before I saw the same ads on any billboard or poster.

You Should Start to Integrate Social Media Too

The baseline is this; if big companies see social media as a great tool, and have already integrated it into their PR operations, then, you should too. When social media is done right, it can deliver you great success in business building and operations.

** We will never share your details with a third party.